Mahon Falls was called out-of-bounds because of adverse weather conditions. The elder lemons amongst us rejoiced whereas the newbies felt cheated.

There is no better way to start this post than by grabbing the report from the group PRO:

“There was a sense of nervous excitement amongst G3 on Sunday last. For some it was another chapter in the Sean Kelly role of honour, for others a totally new experience. Jitters out of the way it was a peppy 30kmh spin to Carrick aided by a tailwind. Then to the first major climb of the day as Tickonor lay in wait, but it was nothing to be feared and was ably dealt with. In heavy misty rain it was on to Powers the Pot and a difficult climb due to visability. 100k in the legs and a welcome stop in Rathgormack where we heard the devastating news that Mahon Falls was closed due to adverse weather. The elder lemons amongst us rejoiced whereas the newbies felt cheated. However it is hard to keep G3 down and they made the best of the situation. Up the Mahon Bridge and safely across the Mauma, it was a jubilant group who sailed home safely. A special mention must go to group captain Anthony who coordinated the training plan that ensured we all completed the course comfortably on Sunday. From all of us thank you and roll on the class of 2017!”

They Say it’s All About The Bike. No, It’s Not

On an event such as this, it’s all about the group. One for all and all for one. In running circles it parallels the Dublin Marathon, demanding stamina and perseverance. The group dynamic is critical in getting everyone to the finish line. There were times last Sunday where the elder lemons did their duty in minding and nursing first-timers. In turn, these newbies displayed true grit and acceptance of this one-for-all ethos so critical on this epic event. Our Group 3 had a mixed bag. There were young and not so young, experienced been-there-wore-the-tshirt bikers together with some who have come to this life-changing sport within the past twelve months. Everyone had trained consistently in the run-up and everybody subscribed fully to the group structure.

The First Time Is The Sweetest

Huge congratulations are in order to DCC members Carol, Benny, Tomás, PJ, Ray and Brendan as part of our Group 3, and to Paul, Ed, Chris, Johnny, Áine and Judit who completed the event with style in other groups. Ian also gets an honourable mention, as he was unable to finish because of a mechanical… cycling can be a bitch!   You are all now enrolled in the SKT 160 band of warriors along with the dozens, if not hundreds, of cyclists who conquered the Comeragh Challenge for the first time. I know that the first is the sweetest, and it’s very likely that you will be responsible from here on for encouraging others to follow you. You may even have to cajole and tell a few white lies to impart a firm self-belief in your chosen would-be comrade! You will be the ones who will assist in looking and minding future first-timers.

I completed my first Sean Kelly 160 in 2007. Unfortunately, it was back in my pre-blogging past and the details are lost, but what stood out for me was the support and you can-do-it attitude I received from others who rode with me back then.

This is now our wish for you: go on to better things if you choose. Give the gift to others. Be sure to mention that it’s not all about the bike. 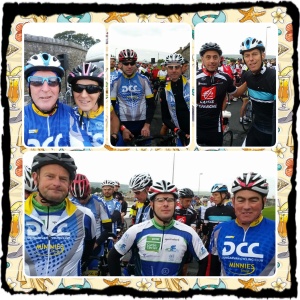 With this in mind, I contacted some of our 160k first-timers, and asked for their feedback. I leave it to the reader to take in the following, in the sure hope that these quotes will encourage others to take on major challenges in years to come:

My memory is the butterflies in my stomach coming in the road. It was almost an energy or anticipation like before playing a county final or starting a new school, can’t describe it. On the spin round it was unbelievable: the camaraderie between the group, the more experienced cyclists seemed to have a sixth sense as to when we were struggling and there were words of both encouragement but also techniques provided at just the right time. What I also noticed was that that it wasn’t always from the same person passing on the advice but actually came from a combination of every cyclist in the group at varying times. The feeling as we worked as a team was unbelievable. Coming down from Colligan was unbelievable, and coming in from the “Nissan Garage” as the streets got busier and hearing the sound of the announcer giving a big shout out to the DCC contingent was surreal. Only then did the achievement hit home. SKT 50K in 2014, 100K in 2015 and 160K in 2016. Progression due to DCC.

My goal for the last 12 months was finally going to be realized. Prior to the event I was racked with self doubt. Despite having trained hard and consistently over the summer I could not imagine putting it all together on the day. But there was no need to worry. As soon as I clipped in the nerves disappeared, the miles flew by and the support and genuine bond from my cycling family contributed to one of the best days of the year so far. A remarkable experience that I will never forget.

Don’t you just love “one of the best days of the year SO FAR”? I think there are further challenges ahead!

I am very happy to have achieved something that not too long ago was way beyond my wildest dreams. It is something I would never achieved without the encouragement and support of my comrades-in-arms and friends in Group 3. On the day everyone looked out for one another and it was some thrill to arrive back into town as a group.

I Felt Good All Day

My legs were good last Sunday. I was properly prepared, rested and fresh. I can safely record this as the most satisfying of my six Sean Kelly 160 tours. A recent regret of mine is that I’ve not done the Dublin Marathon, but I’ve realised that I have completed its cycling equivalent. As marathon runners tell me, apart from the elation of a first finish, the feeling of a best marathon also lasts a lifetime. 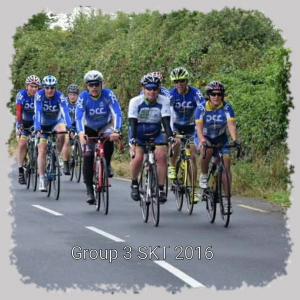 What Did We Learn Today?

Here’s my take on items of note. Perhaps we were aware of some of these, but nonetheless they are worthy of a mention.

I was surprised and delighted to receive an invitation in the post last week to a very pleasant function on the evening before the spin. I had been on the Sean Kelly Tour committee for the first two years, and my contribution was acknowledged, along with several others. My very special thanks to all involved, and especially to Rosarie, Karen and Johnny in Waterford Sports Partnership, to Sinead who is currently heading up the organisation of this massive event, and of course to Sean himself. The little sip of champagne worked its magic for me, as I had good legs all day. 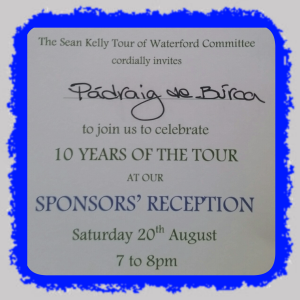 There’s a new service called “Relive”. It plots the spin from the air. Relive our spin here.