Despite the rain and heavy traffic Marion negotiated this stiff test with style, and rather than stop at the summit, we continued on the beautifully scenic descent towards Lisdoonvarna once again. 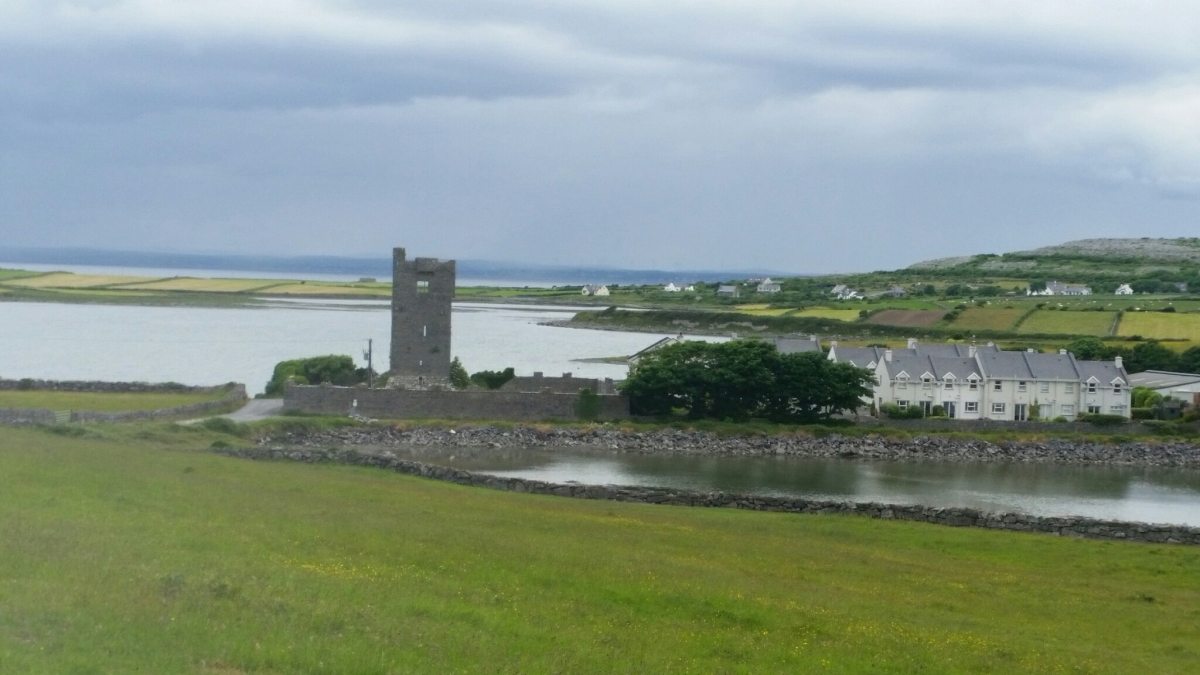 Friday June 17th:
Our previous Tour de Burren was back in 2013, so a return visit was overdue.
We travelled to Clarinbridge near Galway early on Friday morning as mam was “transferring” to my sister, having been with us in Abbeyside for four weeks. Lunch was at our usual favourite spot and we then drove South to Kilcolgan. Marion drove on to Lisdoonvarna and I chose to cycle.

I had a good tailwind heading towards Kinvara and the pace was high. But I decided not to push hard in order to enjoy the view along the coastline to Ballyvaughan. I knew it was mostly uphill from there. The wind came across from that point and a light drizzle started. 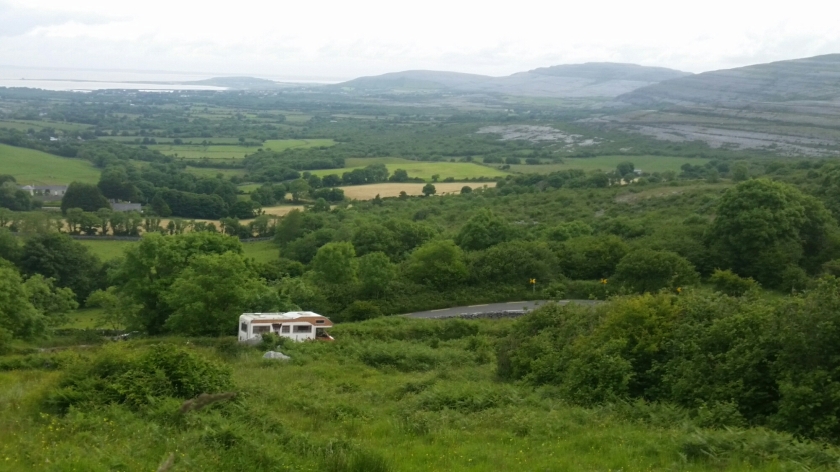 Slow and steady I went up Corkscrew Hill and descended into Lisdoonvarna, having enjoyed a lovely 50k on new roads.
Following a nice pasta, we met up with several other club members and topped the evening off with a few beers at our hotel. All was ready for the main event the following morning, and the forecast for the day was reasonable.

Saturday 18th: we arrived in Ballyvaughan in good time to allow us a relaxing 45 minutes before the gun. 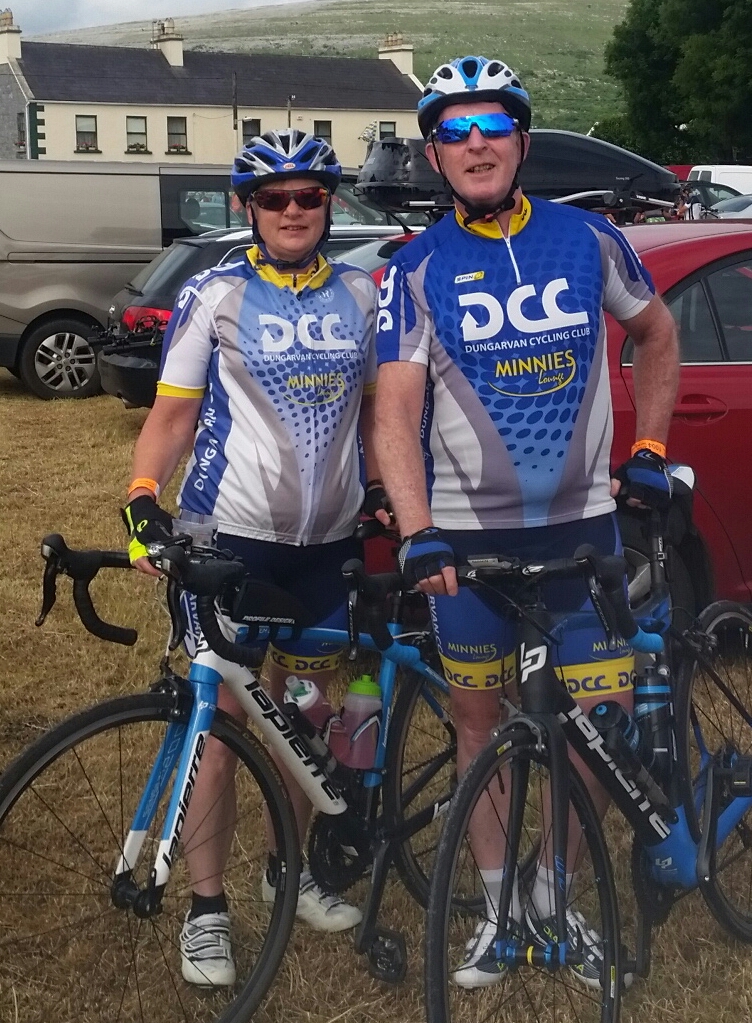 Weather was warm but cloudy as we started at 10am and immediately hit the first climb of the day, cresting at 10k. What was notable on the climb was “Dutch Corner”, a group of approx 20 cheerleaders, upbeat music and a real Tour de France mimic. Thank you to everyone. It was unforgettable.
Onwards then downhill mostly to Kilnaboy before turning West towards Lisdoonvarna for food and coffee.
Our cousins Tim and Noel passed us just in time to get ahead of us for the sandwiches, enjoyed al fresco just before the light drizzle started. 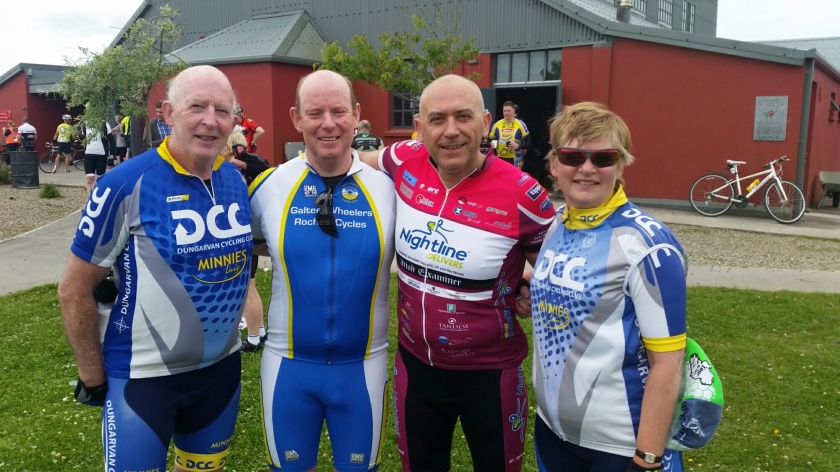 The drizzle continued for the rest of the afternoon as we sped onwards to Liscannor and the climb to Cliffs of Moher. Despite the rain and heavy traffic Marion negotiated this stiff test with style, and rather than stop at the summit, we continued on the beautifully scenic descent towards Lisdoonvarna once again. The rain lightened again and almost disappeared as we headed along the stunning coast road to Ballyvaughan. Marion kept a good strong pace all the way. Unfortunately, the rain returned, heavy this time and as we crossed the finish line we were drenched, but happy. There was no cold, and we had enjoyed a great day biking together. 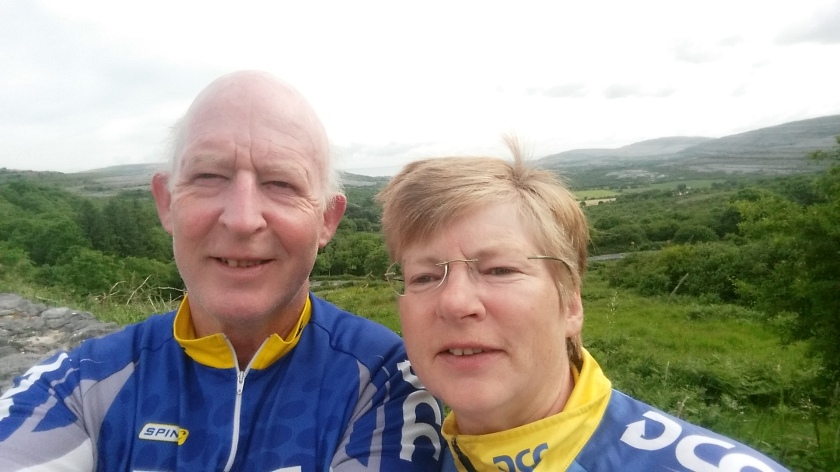 Later that evening we met up with Patrick, Linda and Paul to dissect the day, and finished it off with good food and a few beers back at Rathbaun Hotel.
Distance: 101k @19.5kmph. A huge achievement for Marion. Chapeau, girl! 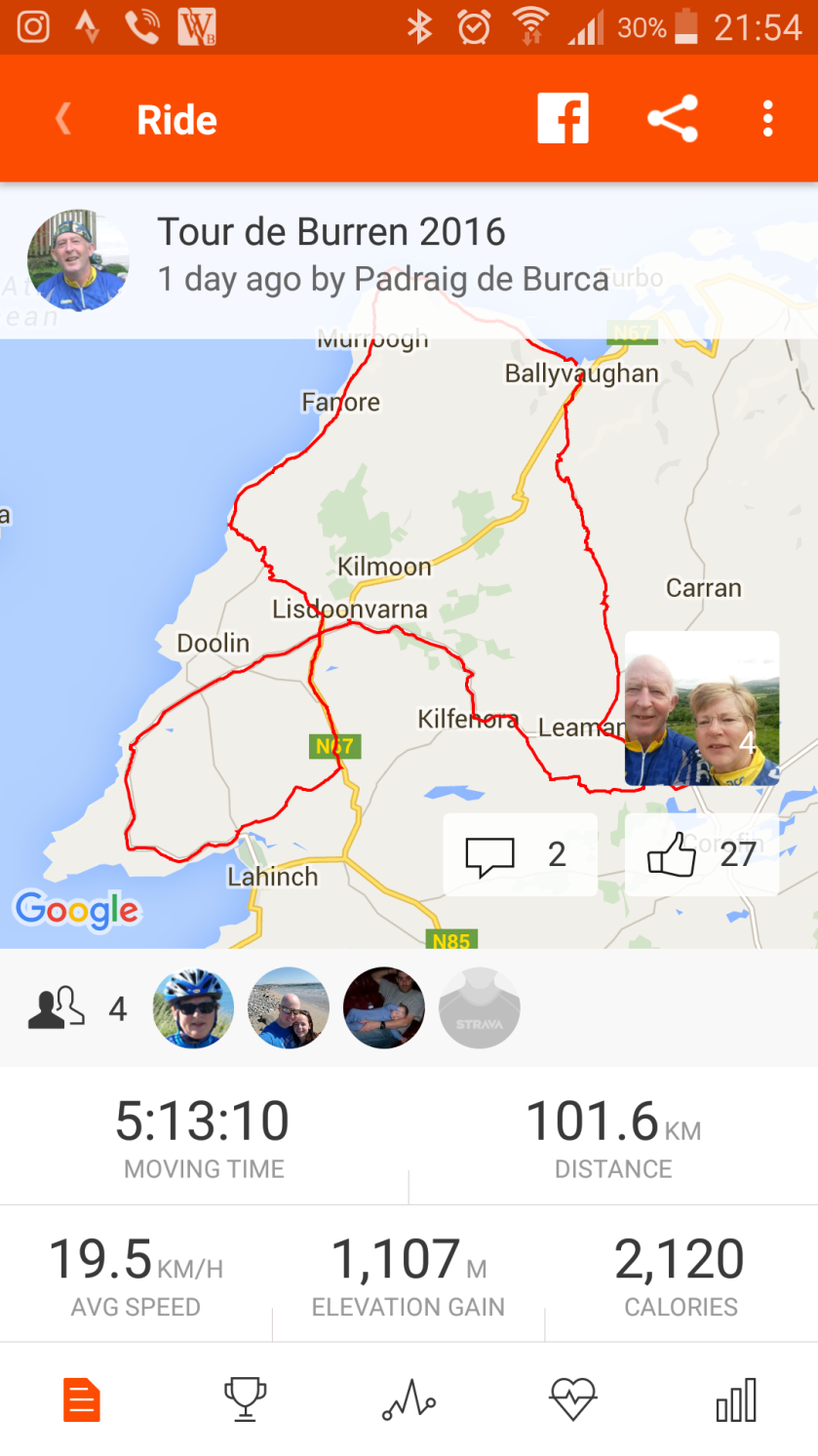 Sunday 19th:
I had a notion to cycle home. However, very heavy rain put paid to any mad plans.